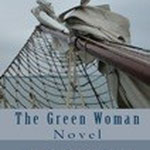 With the novel "Die grüne Frau" (The Green Woman) I had my debut as an author in 2012. In 2015, the English translation was published.

The topic I touched with it has so many aspects yet to be explored that there will be at least three more novels about Prisoners-of-War during the Napoleonic Wars, bone ships and museum work.

The novel The Green Woman is the first book published for the Sawyer-series and about a search for clues that starts out in 1798 with the sinking of a British naval vessel and starts an avalanche of events in 2009, when a museum's employee is trying to catalogue a model ship. The little ship that was built by Prisoners-of-War (PoW) during the Napoleonic Wars, is soon attracting the attention of wealthy art collectors and even a notorious gang of thieves. A mysterious legend tells that the Green Woman knows something of importance - but what? Will Miriam and Peter Sawyer be able to find the legendary Green Woman before anybody else does?

The second novel series - the Penvenan-saga - has been started as well, currently only available in original German version. In this series, Lady Adeline Trevelyan falls in love with French naval officer Jean-Paul Devreux and risks all her wealth, life and future to save him from a prison ship and have a future with him instead of the horrific, but stinking-rich business-man Richard Penryn.

Book 1 (Knochen und Stroh) and book 2 (Seide und Gold) are currently only available in German original language as both eBook and paperback.

News about the Series

The novel "Die grüne Frau" (The Green Woman) has been translated into English and is available as an eBook and as a paperback.

I am currently working on two parts of the Sawyer-series which will chronologically take place before the story in "Die grüne Frau" (The Green Woman). Publication dates are currently unknown.

The same holds true for the other novel series about boneships and the Napoleonic era. A translation into English is currently not yet planned for the Penvenan-saga.

If you are on Facebook, you may take a look at my special page "Bone Ship Mysteries" to get more info about my historical novel series and bone ships.

I am absolutely thrilled that I am already mentioned on websites (thanks a lot, Siri and Selma!): The World according to Dina.

"Stad Amsterdam and Christian Radich look grand with their figureheads, don’t you agree? They look like our fairy-colleague Fee-Christine Aks describes it in her novel “The Green Woman”: “The small figurehead is a slender girl with a long dress”. Following the poetic freedom she puts a blossom in her hand."

A few more words about the story of Miriam & Peter: I am thriving to get into as much detail and historically correct settings about the time of the Napoleonic Wars as possible. With this I do ask a lot of my self as well as of my readers.

If you would like to know more about boneships and PoW during the Napoleonic Wars, please take the following books and websites as a starting point: